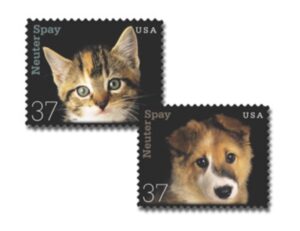 After years of campaigning for the United States Postal Service to issue a spay neuter postage stamp, ISAR’s efforts, with the help of others, were rewarded by the issuance in September 2002 of two such stamps, one depicting a puppy and the other a kitten. The humane educational value of these stamps cannot be underestimated, since the stamps’ printing was in the range of some 80 to 100 million each.

Supporters of ISAR know that we have long stressed the correlation between the overpopulation of dogs and cats, and the cruelties visited upon them, and the adverse impact on the public health, safety, welfare and environment. While overpopulation’s unfortunate and damaging consequences are everywhere to be seen and experienced in the United States, the fate of unwanted dogs and cats elsewhere in the world — not only in the so-called undeveloped and under-developed countries — is nothing short of horrendous, as those of us who care about the wellbeing of those animals know only too well.

For any organization, ISAR included, to engage in overpopulation and spay/neuter public education in those countries, enormous human and financial resources would be required. As a practical matter, with so much to be done in the United States, little overpopulation-spay/neuter public education can be done abroad. But there is something that can be done to send the spay/neuter message around the world, at no cost to American animal rights organizations: issuance by the United Nations of a spay/neuter stamp.

And issuance by over one-hundred-plus countries around the world!

Stamps issued by the United Nations Postal Administration serve the purpose of raising the consciousness of those who view them. A United Nations commemorative stamp carrying the “Spay/Neuter” message would provide a way to educate the public on dog and cat overpopulation worldwide. With spay/neuter stamps issued from the three United Nations offices located in New York, N.Y.; Geneva, Switzerland; and Vienna, Austria, the educational value of the spay/neuter stamp will extend worldwide and serve to educate more people on the importance of spaying and neutering.

Annually, six innovative U.N. commemorative stamps are produced and put on sale for a period of twelve months. Stamps from the United Nations are recognized as postage when applied on mail from the three United Nations offices. The perils of dog and cat overpopulation need to be addressed because it is a worldwide concern. With a United Nations stamp depicting the importance of the spay/neuter message, we are one step closer to raising the world’s conscience about ISAR’s battle against dog and cat overpopulation.

(Please forward this to others who may be sympathetic to our cause.)

WHEREAS, the problem of dog and cat overpopulation is widespread throughout the world, and

WHEREAS, unwanted dogs and cats, through no fault of their own, have an adverse impact on the public health, safety, welfare and environment, and

WHEREAS, unwanted dogs and cats experience suffering and untimely, and often cruel, deaths, and

WHEREAS, one method of reducing these problems is through spay/neuter programs, and

WHEREAS, for such programs to be created and implemented, the world-wide public’s awareness of the spay/neuter message must be heightened, and

WHEREAS, one method of heightening that awareness is through the production of United Nations postage stamps carrying the spay/neuter message,

NOW, THEREFORE, we the undersigned, hereby petition the United Nations Postal Administration for the creation and distribution of a postage stamp (or stamps) carrying the spay/neuter message.